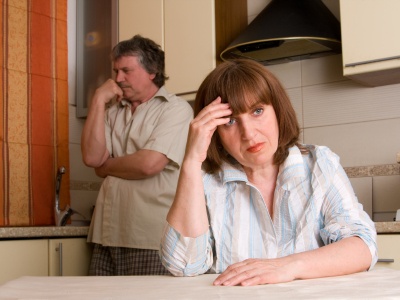 Aaron and Mary
Aaron and Mary have been married 23 years. She is often angry. He is a very gentle soul who has a lifestyle admired by many. He has a lot of money, he “works” by playing golf 2-3 times a week while courting new clients, he has a gorgeous loyal wife and two beautiful children who are doing well in life.He is rarely angry. So, what’s the problem? Aaron drinks a little too much some times at his watering hole with his buddies but tells his wife he is somewhere else if she calls. He does this because he want to avoid being yelled at and criticized. He feels he is a grown man and shouldn’t have to “report” to his wife every time he has “a few beers- even if she had made family plans around his being home as promised. His attitude triggers Mary’s underlying anxiety and anger.

How does Mary React to this behavior? To put it in simple term, she becomes angry, ballistic, yelling, screaming and criticizing. She angrily threatens to leave the marriage. He quietly sits there and takes her criticism, promises to do better, but then several weeks later does the same thing, with another excuse as to why he didn’t notify her of his change of plans.

Mary sees the problem as quite simple: Aaron needs to control his drinking and become more transparent as to where he is when she asks him. She truly believes that he is much more to blame for the problem than she could possibly be. She blames him and sees him as needing to change his behavior in order to fix the problem.She even goes to a therapist who tells her that his drinking isn’t really a marital problem…. it is a personal problem. Neither think that Aaron is an actual alcoholic. Alcohol is not the problem as much as her not trusting where he is because he has a history of lying about it.

So why doesn’t he just change to please her and keep peace? Because, as noted above, he does not see himself as an alcoholic; rather, he sees himself as just someone who drinks too much sometimes and then lies about it to his wife,in order to avoid trouble. He argues that he only does this once every two months. She says it is biweekly. Besides, in his mind he has “earned” the right to have the life style he wants….including the merriment, as long as he is not hurting anybody, he is responsible, he is not unfaithful, and he also spends sufficient time with wife and kids. He reasons that she should be more flexible considering the great lifestyle that he gives her.

So, they are gridlocked. The issue they are struggling with is called a perpetual issue because it appears to be unsolvable. Her reaction to it isn’t getting the result that either one of them wants. He wants more leeway. She wants more reliability and trust.

So, how exactly should Mary react differently that might deal with this perpetual problem so that both an get more loving behavior from each other?

Here are some steps I would suggest to Mary:

Step 1– Stop criticizing /blaming if he drinks too much or he is going to miss family dinner to be with his friends/business associates. Accept that he is passive-aggressive and/or locked into a lifestyle and figure out a new reaction to it.Try to broaden your scope and diminish the importance of this specific behavior in your mind, in the context of many other good things he might do for you or your family.

Step 2– Sit down and have a “heart to heart” talk with him pointing out how you FEEL when he does what he does..mainly disrespected and not prioritized by him.Let him know that it causes resentment and anger in you which makes you want to pull away from him. The marriage may be at stake if his behavior continues. Point out that it is the NOT LETTING HER KNOW THAT CAUSES MORE OF THE PROBLEM THAN HIS NOT BEING THERE.

Step 3- Stand up for yourself regarding how you are going to handle it in the future….BUT do not threaten. Simply tell him how things are going to change if he continues….such as

-stop planning family activities around him…do not count on him being home at certain times. Do not schedule your events around his having to be home. Accept that this is the way he is sometimes and focus on his positive characteristics. Reward him when he is on time or when he does call.

-distance yourself emotionally from him and tell him that you cannot have a secure love for a man who treats you this way,because it is not fair, it is disrespectful, and it is very upsetting to you.

-start building your own life around things you like to do as a person. Be with your friends more, try not to make your husband the center of the world so much and stop feeling guilty about “me time” you need.

The idea here is that chances are very good he will change if you changes how you deal with the situation. By standing up for yourself, it now puts the ball in your husband”s court….it is now his decision what he is going to do.

Remember, you cannot control another person. But you can control how you react to the other person which often greatly influences what they do decide to do in the future.